Hello world, welcome to Östersund in 2016

Östersund - Creative City of Gastronomy and the Region of Jämtland will host the Annual Meeting of UNESCO’s Creative Cities Network in 2016.JPG 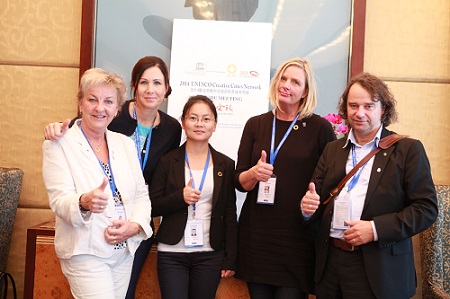 Östersund - Creative City of Gastronomy and the Region of Jämtland will host the Annual Meeting of UNESCO’s Creative Cities Network in 2016.

The bid was agreed by unanimous acclamation by UNESCO’s network in Chengdu/China on the 28th September 2014.

Östersund was appointed a UNESCO City of Gastronomy on 20th July 2010. One of the reasons for the designation was the city and region’s extensive support for gastronomy entrepreneurs and farmers who have a deep connection to the surrounding nature.

The designation is a direct consequence of Jämtland’s regional development strategy, which ties together food/gastronomy, culture and tourism in its various value chains.

“Being in the creative cities network helps create job opportunities and attracts new companies to Jämtland and not only in the creative sector”. Carina Asplund, Deputy Mayor of Östersund City,.

Östersund and Jämtland invite cities who have identified culture and creativity as a strategic factor in their sustainable development to discuss international cooperation and imaginative ideas.

“Our future lies in the hands of creative sustainable businesses collaborating with clever public sectors” says Charles Landry who will be co-moderator of the 2016 annual meeting in Sweden.

“The meeting will be an opportunity to show the world that our region is on the right track, says Fia Gulliksson-Food Ambassador and food entrepreneur from Östersund.

The Creative Cities Network connects cities who want to share experiences, ideas and best practices for cultural, social and economic development. Currently there are 42 cities in 7 genres: Literature, film, music, crafts and folk art, design, media arts, gastronomy. Examples include: Bologna, Montreal, Beijing, Berlin, Seoul, Santa Fe, Edinburgh, Melbourne, Buenos Aires and Krakow. The network is estimated to have 80 members in 40 countries by the 2016 annual meeting. The rapid expansion is due to the high priority of the program as the General Director of UNESCO, Irina Bukova explains: “Ten years after its launch this network lies at the heart of UNESCO’s actions in the area of culture and creativity”.

Proposed themes for the annual meeting in Östersund and Jämtland 2016 include: